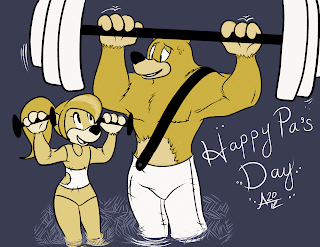 A silly drawing of my daughter and father duo, Goldie and Pa (I never... named him? Aha) for Father's Day. There was a lot of ideas I was originally going to do but drawing these two came a little more naturally. I listened to a lot of bluegrass while drawing this, even though they're not really country folk but circus folk. Anyways, hope ya'll enjoy!
Posted by ame.art at 6:43 AM No comments: 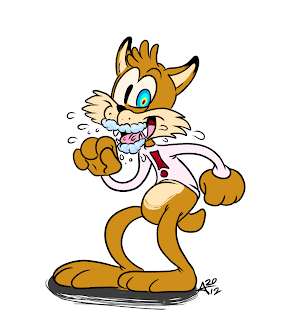 I felt like the world needed to know I drew this insane bob cat. For those who never played the game, this is Bubsy. He's never rabid in the game, but I was having a fun time playing with it. I could have probably done a better time with the pose, but whatever.
Posted by ame.art at 6:50 PM No comments:

Can Fan Art Have a Positive Impact?

Good morning, everyone! I hope everyone's having a great day; its bright and sunny here, and I decided to sit down and work on a character design I've been wrestling with in my head for along time.

I wanted to talk about how fan art can be a positive impact on devolping you're own style, and I think Diggy here is a great example of this. The reason why I wanted to discuss this was because a few weeks ago, a fellow artist I looked up to made some negative commentary about fan art. But I don't believe this is true. I've been sketching fan art for fun since a young age, and I would argue that its had a more positive impact on me then a negative one...!

Sure, I could discuss how fan art makes you more "popular" on the internet. This is a positive marker because it can get your name out there. However, I don't really draw fan art for popularity; although, I did dedicate some of my time years ago drawing other artists' characters to get on their radars (and honestly, knowing other artists who can help you down the line in your career is better then having 1,000,000 page views on deviantart...).

I digress. I wanted to talk about how different character designs can have an impact on your character.

Diggory is my mole character; I made him around the time I was really into Harry Potter and discovering I really liked Redwall, so the name influence is from Cedric Diggory from Harry Potter and... well, moles from Redwall series.

Anyways, here's the most recent development on his character. 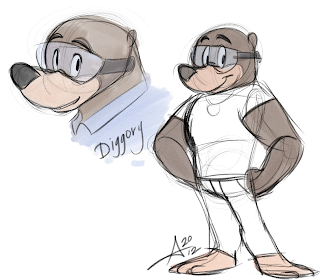 I really like this character design, because its not usually normal for me to make such a top heavy character. I don't think I would have had the confidence to make such a design if it hadn't been for fan art I've been creating. Particularly, the Banjo Kazooie series. I've been doodling BK fan art for a while now. I'm really fond of drawing Jamjars.

Now, Jamjars, and his brother Bottles, are short characters. They barely have legs, so I changed that a bit when I sketched them.... 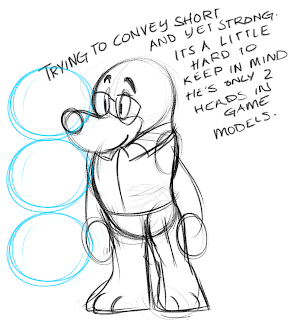 This image is obviously trying to stay with the canon shape and size but adding my own twist to it. See, when I create fan images, I'm allowing myself some leverage to do what I want, but on the other hand, I like to keep in "canon" (or official) what the studio's designers might have done. You can see this mind set down in a lot of my fan characters as well. 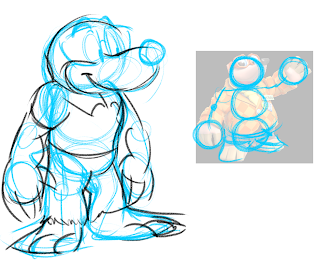 As you can see, I'm trying to focus on the unique characteristics and shape the character has. I felt rather uncomfortable at first giving a character short legs, but longer arms - it looked weird to me! I think if fan artists did this, instead of trying to mold a character into their own style, they can learn a lot. Drawing unique characters shapes and trying to analyze what makes a character really helps a lot. All characters aren't going to look the same.

Observing from what you see means to not only take in real life, but understand what art masters and other artists are doing to. That's the importance of drawing fan art, I think. Its not just about how many Bugs Bunny's you can draw, but if you're really obtaining the information Chuck Jones is giving you when you draw it. If that makes any sense at all. 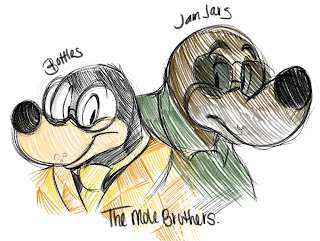 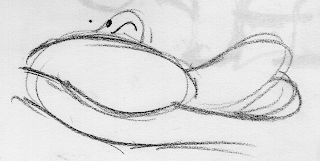 Oh hello. My friend and I went to the zoo today so we could sketch some animals.
Here is a little snake hanging off a branch. He was peaking around his fat body and I thought it was cute. 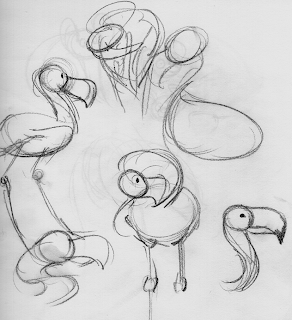 I was rather fascinated with how much flexibility is in the flamingos neck. They were quite loud and quite beautiful. 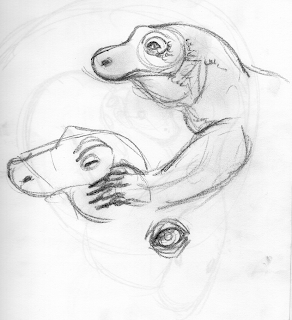 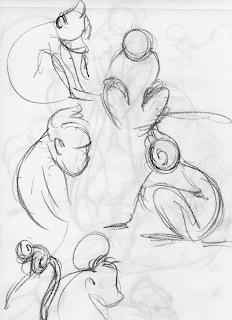 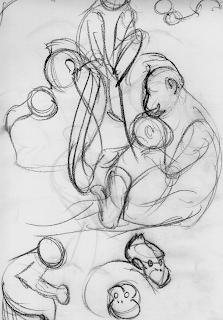 The mother and its baby got really close and so we sketched them a few more times before they moved. 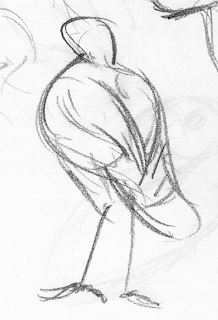 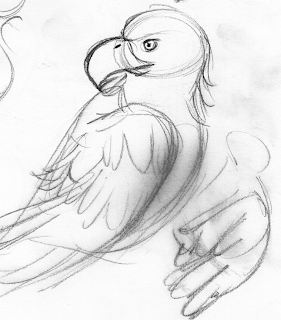 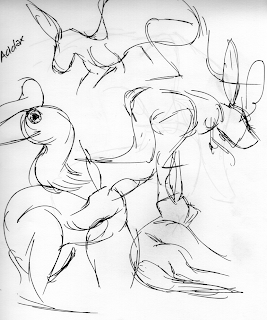 I really enjoyed trying to break down the structure and sketch them as shapes but I'm not sure if it was going the way I had planned it to. But I'm sure there will be plenty more where this came from. 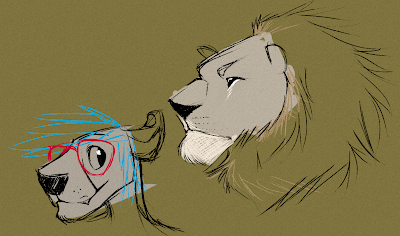 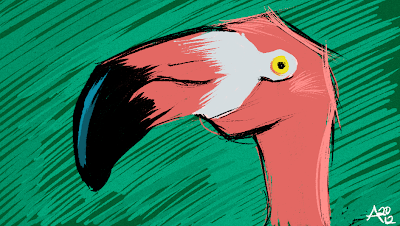 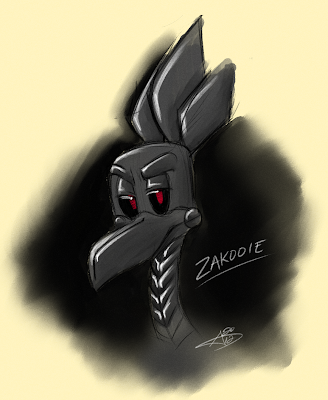 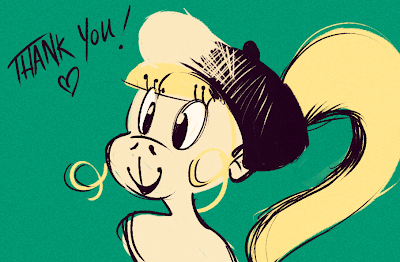 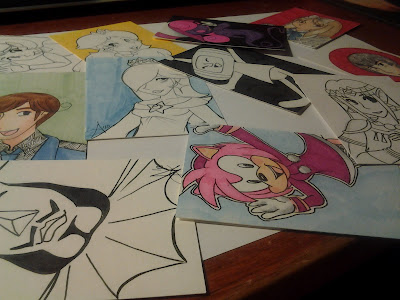 I finally got the guts to post something on my etsy store! http://www.etsy.com/shop/ameart
Posted by ame.art at 10:10 PM No comments: 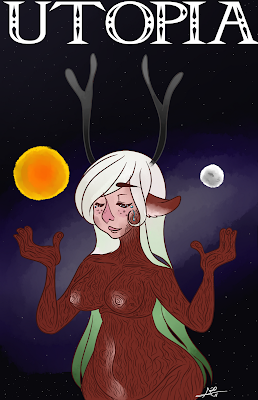 Here is a piece I did last year as well, but hadn't posted on the internet until now. We were asked in my drawing class to make a concept for Utopia, and this is what I produced for it. I'm not sure what was going through my head at that moment, but I still rather like the concept. I think I was trying to make my own representation of Mother Earth/Gaia? My professor did ask me why she was crying, and I wasn't really prepared for it, but I quickly replied, "Well, even though she's suffering, she's still happy to make the sacrifice for her children." I think that still holds true.
I'm not really happy with how I handled the balancing of the Sun and the Moon, nor with the UTOPIA on the top; I still do think the Goddess is pretty. Maybe I'll return to this some day.
Posted by ame.art at 2:10 PM No comments: